Read a Classic Novel, Learn About the M1 Garand

Thomas Pynchon won the 1974 U.S. National Book Award for Fiction for his novel Gravity's Rainbow. It is not an easy read. Like all of his novels, it is complex with many references and allusions to a wide range of specialized topics. Set within the military and the intelligence community during the last year of World War II, one of these topics is the M1 Garand rifle. Pynchon served for two years in the U.S. Navy, studied engineering physics at Cornell, and was a technical writer at Boeing. His writing is influenced by all those experiences.

About three-quarters of the way through the novel (on page 594 out of 776 in the Penguin Classics Edition) a passage discusses the dreaded Garand Thumb.

As you should learn, you must be careful when loading the M1 Garand. Push the loaded en-bloc clip into place with your right hand. Your thumb pushes the clip down into the magazine area while the heel of your hand blocks the operating rod handle from moving forward.

If you are hesitant about pushing the clip into place, or if the heel of your hand knocks the operating rod handle backward with the clip partly inserted, the operating rod will slam the bolt forward in a painful attempt to chamber your thumb as the next round. 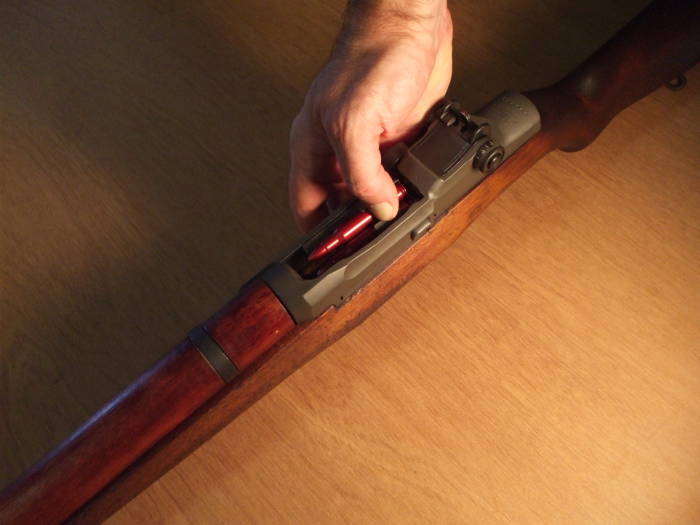 (yes they're sentient all right, beings from the planetoid Katspiel, of very very elliptical orbit—which is to say it passed by Earth only once, a long time ago, nearly back at the grainy crepuscular Edge, and nobody knows where Katspiel is now or when, or if, it'll be back. It's that familiar division between return and one-shot visitation. If Katspiel had enough energy to leave the sun's field forever, then it has left these kind round beings in eternal exile, with no chance of ever being gathered back home, doomed to masquerade as ball bearings, as steelies in a thousand marble games—to know the great thumbs of Keokuk and Puyallup, Oyster Bay, Inglewood—Danny D'Allesandro and Elmer Ferguson, Peewee Brennan and Flash Womack . . . where are they now? where do you think? they all got drafted, some are dead on Iwo, some gangrenous in the snow in the forest of Arden, and their thumbs, first rifle inspection in Basic, GI'd, driven deep back into childhood as little finger sweat-cams off M-1 operating handle, thumb pushing down follower still deep in breech, bolt sshhOCK! whacks thumb oh shit yes it hurts and good-by to another unbeatable and legendary thumb, gone for good back to the summer dust, bags of chuckling glass, bigfooted basset hounds, smell of steel playground slides heating in the sun)