Bluing is a chemical method of protecting steel from rusting. It's a form of passivation, the electrochemical creation of a thin outer shell of protective material. In the case of blued steel, the protective layer is magnetite or Fe3O4, a black oxide of iron. Bluing provides just partial protection against rust, you still have to be very careful to apply oil to the surface. Bluing has been a traditional protective treatment for guns. Parkerizing provides better protection against both oxidation and wear. It requires less day-to-day maintenance and so it is more attractive to the military. So, you may want to remove the bluing from your guns in preparation for parkerizing.

This is not the way to remove bluing from steel, but it is one way to do it. It might work for you. I'm no metal-treating guru.

CAUTION: Technical data and information contained herein are intended to provide information based upon the limited experience of individuals under specific conditions and circumstances. They do not detail the comprehensive training, procedures, techniques and safety precautions which are absolutely necessary to properly carry out similar activity. Always consult comprehensive reference manuals for details of proper training requirements, procedures, techniques and safety precautions before attempting any similar behavior.

OK, that should be enough lawyer repellent...

Some background on Bluing 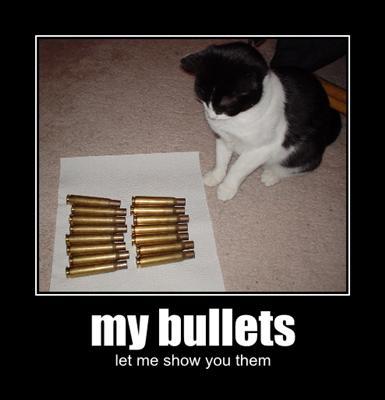 Of course those are cases and not bullets. Cats are notorious for their poor grasp of technical terminology, not to mention their typing and English grammar....

Bluing is an electrochemical passivation process to partially protect steel against rust. That's electrochemical as in chemical reactions which take place in a solution at the interface of an electron conductor (a metal or a semiconductor) and an ionic conductor (the electrolyte), and which involve electron transfer between the electrode and the electrolyte or species in solution. It does not mean that electrodes and wires are involved at all!

Passivation is the formation of a thin non-reactive surface film inhibiting further corrosion. Bluing is therefore the oxidation of the surface of the steel, oxidation in a form preferable to the oxidation of rust. The name comes from the resulting very dark color, really more black than blue.

Rust is Fe2O3, a red oxide that occupies more volume per iron atom than iron itself. That slight space differential causes the typically reddish rusting away of iron. You might think of the iron as levering itself away in tiny Fe2O3 particles from the main body. See the Wikipedia articles on rust and corrosion for examples of catastrophic structural failures caused by rust build-up forcing apart adjacent parts, sometimes called "rust smacking".

How can Fe3O4 occupy the same space as just plain old Fe? Don't those extra oxygen atoms have to also bulk up the material as with Fe2O3 or rust?

No, because atoms are mostly empty space. The density in iron atoms per volume will depend on the shape, size, and interaction of the electron orbitals, which are really electron probability density functions.

On the other hand, magnetite is Fe3O4, a black oxide occupying the same volume per iron atom as iron itself. A chemical reaction called "bluing" can form an outer layer of magnetite and provide minimal protection against corrosion. The treated steel must be coated with a thin film of oil, and the bluing is not resistant to wear and is typically no thicker than 0.0001 inches.

Hot bluing is typically done by immersing the parts in a solution of potassium nitrate (KNO3), sodium hydroxide (NaOH), and water heated to the boiling point. Yes, boiling lye, be very careful.

Parkerizing is another electrochemical method of protecting steel from corrosion, and it also increases resistance to wear. Parkerizing is the creation of an iron-phosphate conversion coating on the outer surface of the steel, producing a grey matte finish.

There are several related techniques, but generally they involve a phosphoric acid solution with key ingredients of zinc or manganese, with varying amounts of nitrates, chlorates, and copper, the solution being heated to 88-99°C, close to the boiling point. So, instead of the boiling lye of bluing, parkerizing uses boiling acid. It's nasty at the opposite end of the pH scale.

Phosphating, interacting with a coating of cosmoline over several months to years, may produce a light greenish-grey color.

On To The Project

Norinco corporation applies a nearly black and sometimes uneven bluing to their products, like this M1911A1 slide. Parkerizing should provide a more protective finish, and most any finish would be more attractive than this.

Start by disassembling it. See this guide for instructions on how to field strip and reassemble an M1911.

M1911A1 pistol frame, the oil has been removed with brake cleaner.

These photographs show the pieces on a sheet of white paper. See, it's nearly black. Maybe some brown, very little sense of it being blue.

Clean off all the oil. Something like brake cleaner (basically a compressed spray of hydrocarbon solvents) would do an excellent job. Common drug store isopropyl alcohol in a spray pump bottle may be good enough to get the job done, even though it's 30% water.

Here is the active bluing-removal agent — white vinegar. See, bluing isn't all that protective after all. This is marked as being distilled and then diluted to 5% acidity.

How did I come up with the crazy scheme of dunking precision machinery in vinegar?

I saw a number of postings to various on-line gun forums where people reported doing this. The one that I most remember was from a guy who discovered that vinegar removed bluing when the Taco Bell hot sauce dripped onto his gun because, no joke, he was going to the range and carrying his gun and some tacos in the same paper bag. When he got to the range and discovered the mess, he wiped off the hot sauce and saw that the bluing came with it.

His unorthodox and rather inappropriate carrying method certainly got my attention. I will keep my tacos and my pistol in separate bags, but at least we can learn from his observational chemistry. Taco Bell sauce lists vinegar as a primary ingredient.

All the blued parts that will eventually be parkerized have been disassembled, cleaned, and placed in a glass dish.

Then pour in enough vinegar to completely submerge all the parts and wait. The bluing started to come off after just about 15 minutes or so.

The blued M1911 parts have been placed in a glass dish and covered with vinegar. It's nearly impossible to see in this image that all the parts are completely submerged in the clear liquid.

The outermost layer of blued steel is converting from magnetite, or Fe3O4, to rust, or Fe2O3, after about 20 minutes in the vinegar bath.. Again, these parts are completely submerged in clear vinegar although it's almost impossible to tell in this image.

The frame has turned orange-brown after maybe 20 minutes.

I think that what's happening here is that the acetic acid in the vinegar is converting the very thin outer layer of black magnetite to the orange iron oxide of rust.

So what if it ends up being 0.0001" smaller — Norinco fabrication standards are far looser.

You can't really see it here but these parts are submerged in vinegar. The vinegar is clear and only shows up in this picture as the reflection of the flash at lower left.

Remove each part every 20 minutes or so and wipe it down with a paper towel to remove the lifted oxidation. Then place it back in the vinegar bath.

The orange-brown oxide starts to come off as you handle the parts.

The parts were removed and wiped with a paper towel every 15 to 20 minutes until they were all "in the white" or without bluing. The rust starts coming off as soon as you touch the parts.

M1911 frame and slide with all bluing removed. The slide needs further wiping to remove rust.

There seemed to be bare metal everywhere after two hours. Remove the parts, pour out the vinegar, and place the parts back in the dish. Then place the dish under a slowly pouring faucet for several minutes to flush the vinegar.

Follow that with further careful flushing of each piece and hand drying.

The M1911 frame and slide have been rubbed with extra fine steel wool and a light coating of gun grease rubbed onto the surface to protect against rust until the parts can be bead blasted and then parkerized.

You can heat an oven to 250°F or 120°C and place the parts inside for about 20 minutes on a pan lined with aluminum foil.

The heat will dry the parts and leave some light orange rust deposits.

The next step is to rub any light orange rust deposits with extra fine steel wool. Then apply a thin film of gun grease.

The next step was to parkerize the metal.

Click here for the page on how the parkerizing was done.