7.62x25mm Tokarev cartridge, with a brass case and FMJ bullet.

The 7.62x25mm Tokarev cartridge is a bottle-necked pistol cartridge designed in the Soviet Union. It was widely used throughout the USSR and the Soviet satellite states. It is effectively a more powerful Soviet version of the 7.63x25 Mauser cartridge. It has been used in a variety of handguns, including the Soviet Tokarev TT-33 (and copies like the Romanian TTC) and the Czech ČZ vz 52. A number of submachine guns also used it.

The Mauser C-96 pistol firing the 7.63x25mm Mauser cartridge became very popular world-wide after its 1895 invention. In 1908 the Tsarist Russian army began to allow its officers to purchase the Mauser C-96 to carry instead of the domestic Nagant M1895.

The two cartridges are physically very similar, to the point that many weapons can chamber both rounds. However, the significantly higher power of the 7.62x25mm Tokarev will likely lead to weapon damage and user injury. The Czech version is loaded to 25% higher pressure yet, leading to significantly higher velocity and energy and to greater danger if used in weapons not designed for it!

The Czech ammunition must not be used in weapons not specifically designed for it!

Comparison to other common rounds

Also compare the 7.62x25mm Tokarev to some other common handgun cartridges.

Users commonly report that the recoil, report, and muzzle flash of a 7.62x25mm Tokarev cartridge are similar to those of a .357 SIG. The unusually loud report and prominent muzzle flash can be surprising to the unprepared shooter. This round can perform more like a small rifle cartridge than a typical pistol cartridge.

The so-called "Czech Load" is suitable for use only in handguns specially designed for the higher pressure such as the ČZ-52.

However, is the ČZ-52 really that much stronger than other 7.62x25mm handguns? Dimensional measurements do not support this frequently made claim. Click here for some speculation on the ČZ-52's relative strength. 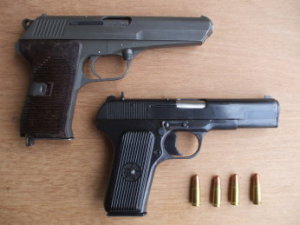 Soviet ТТ-30, 7,62-mm самозарядный пистолет Токарев образца 1930 года or 7.62mm Samozarjadnyj Pistolet Tokareva obraztsa 1930 goda, or "7.62mm Self-loading Pistol 'Tokarev' in the model of the year 1930", slightly modified into the ТТ-33 and still being manufactured with further modifications by Norinco. Romania manufactured a copy of the TT-33 known as the TTC or Cugir Tokarov.

Soviet PPSh-41, Пистолет-Пулемет Шпагина, Pistolet-Pulemyot Shpagina, or "Sphagina Machine Pistol", designed by Georgi Shpagin in 1941 as an inexpensive produced and easily maintained alternative to the PPD-40.