When you buy Soviet or Russian military surplus ammunition in "Spam cans" contained in wooden crates, you will find that the containers have cryptic labels. Unlike some merchandise that arrives in custom boxes and is clearly marked, these crates can be difficult to decipher. The markings clearly tell you about the bullet type, powder type, and year and place of manufacture, if you know how to decode the markings. Here is how to read Soviet military surplus ammunition labels.

Here are two views of a wooden crate containing 7.62x54mmR ammunition. Once you know how to read the markings, you can clearly see that this crate contains 880 rounds of 7.62mm cartridges. The bullets are the standard military ball, not armor-piercing, tracer, or other even more exotic types. 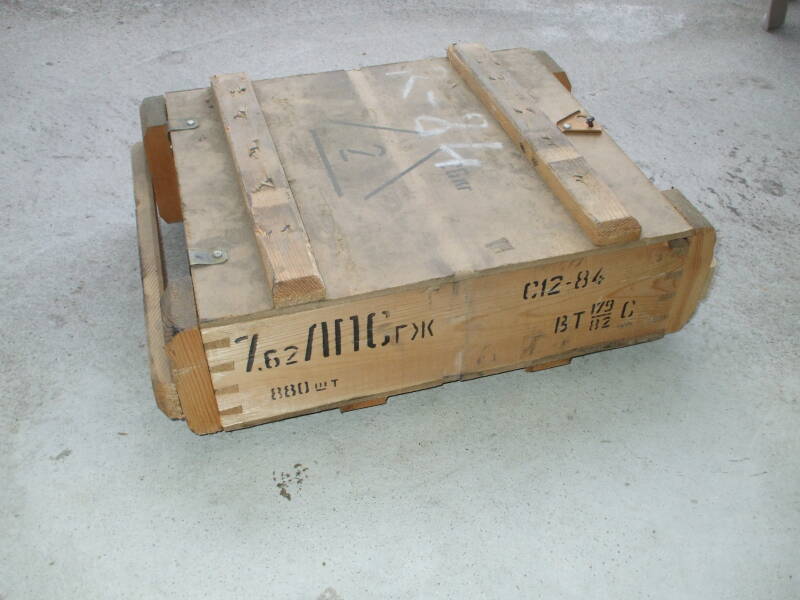 The large triangle with the "2" on the top surface is a cargo classification, right next to it is the total weight and КГ or "kg", for kilogram.

The white stickers are actually in Czech, with the lower one repeating the same content in English.

To the right are Брутто and Нетто, brutto and netto, or gross and net weight.

We will be able to tell more once we open the case and see the markings on the sealed metal cans. That will tell us:

The cartridge cases are the usual bimetallic cases, steel clad with "gilding metal".

How old? The powder was manufactured in 1977, the same year the cartridges were loaded.

Manufactured where? The powder was manufactured in Kemerovsk, and the cartridges were assembled in Novosibirsk, if that matters to you.

Inside the wooden crate are two green metal "Spam Can" containers, as shown here. Resting on top is the included can opener. These are Russian military surplus, or more precisely, Soviet given their vintage. 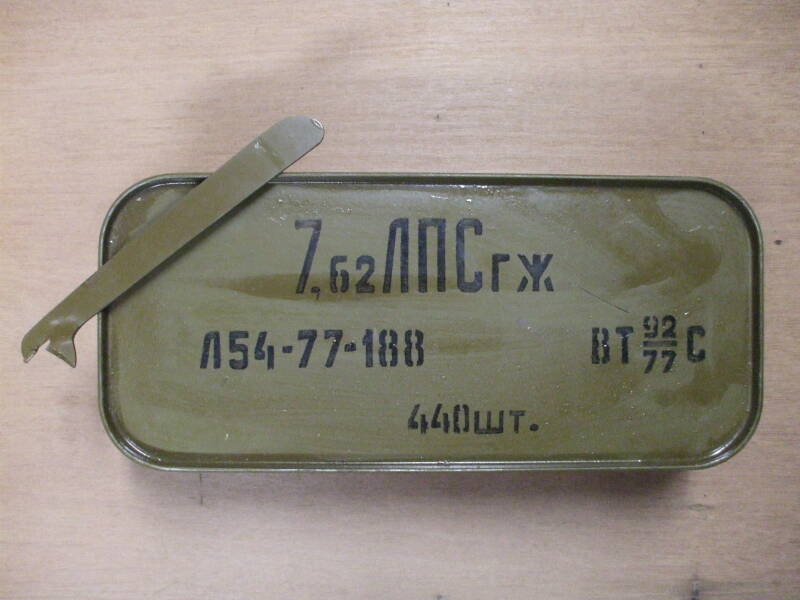 The short version is that ЛПС is equivalent to "military ball" in U.S. nomenclature, but...

What we see on the can:

Let's start with the easy part. 7,62 specifies the caliber. Like most Europeans, Russians use "," to indicate the decimal point.

Next, almost as easy: Did you notice that the wooden case was marked 880ШТ and it contained two metal packages marked 440ШТ?

As for the rest of the markings, here is what I have figured out with the help of the Russian-language Wikipedia and two U.S. military training manuals, TM 30-544 Russian Military Dictionary and TM 30-546 Glossary of Soviet Military and Related Abbreviations. You may also want to ask Google to search for a DIA document from August, 1984 with explanations of headstamps and packaging for most if not all countries:
"small-caliber ammunition identification guide" filetype:pdf

Realize that, of course, the Soviets used the Russian language's Cyrillic alphabet. In some cases, such as the letters А К, М, О and Т, our corresponding Latin character looks the same. But often, the Cyrillic only looks like a Latin one. For example, Cyrillic В is equivalent to Latin V, Cyrillic Н is equivalent to Latin N, and so on. Others, like Cyrillic Ж, И, Ш, Щ, Я and several others are unlike anything in the Latin alphabet. Here is a quick guide to the Cyrillic alphabet.

Now let's decode the rest of the ammunition case markings.

ЛПС means Light ball bullet with mild steel core. An added two-digit number would indicate a bullet with a pattern introduced in that year. For example, Б-30 and Б-32 are armor-piercing bullet designed introduced in 1930 and 1932.

Л54 simply means lot series Л54, you would have to check with the factory records to figure out what that really means.

The rest means that it was manufactured in 1977 at factory #188. That factory is in Novosibirsk (or Новосибирск) as this table tells us. The table is from the DIA "Small-Caliber Ammunition Identification Guide".

This table is for Russian factories. Other countries of manufacture will have their own codes. Bulgarian, for example, will have "10" in a double circle (and use БР as an abbreviation for "count" or "quantity").

The production year and factory number, 77 and 188, appear in the somewhat indistinct headstamp. That's a modern Russian commercial Bear cartridge at left, and one of the rounds from this surplus case at right. 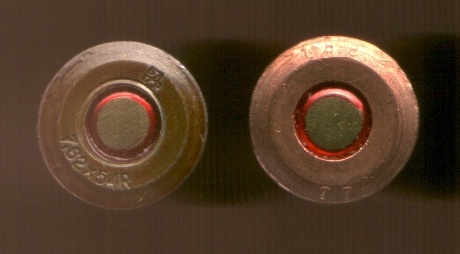 As for the powder type and source, as seen above, ВТ is the type, С is the source, and it's lot #92 from 1977. I have only limited information on how to interpret the type and source codes. I don't know what type ВТ is, but source С is the "Progress" factory of Kemerovsk.

I see a lot of confused postings in on-line forums where people think that ВТ means "Boat-Tail" bullet. Remember that these cans are labeled in the Cyrillic alphabet and so ВТ is equivalent to Latin VT! However, the frequency of this misunderstanding suggests that ВТ is a common powder type. I would guess that the В stands for винтовочный or vintovochniy, meaning "for rifles".

Don't count on this list being 100% complete or accurate. There is debate among specialists on the details of these. Factories used varying marks, sometimes (but not always) because the factories were renamed. Factory #577 in Solikamsk was established in 1941, then renamed Ural in 1966. Marks might be for a city name at times and the factory name at other times. "K" might indicate the city of Kazan, or maybe the S. M. Kirova factory in the city of Perm. Also see all the reorganization and renaming after the end of the Soviet Union, plus the spelling differences between Russian, Ukrainian, and Belorussian.

К — завод No98, Казанский пороховой завод — Kazanskiy porokhovoy zavod — Kazan powder factory. Or, К might indicate the Perm factory, which was named for С. М. Кирова (that is, S. M. Kirova) while С may mean the Kazan factory.

What about stripper clips?

I was contacted by someone wanting to make a highly accurate replica of an SKS ammunition crate. They wondered how "with stripper clips" might appear.

But then he found an illustration in the book Kalashnikov: The Arms and the Man: a Revised and Expanded Edition of the AK47 Story, by Edward Clinton Ezell (Cobourge, Ontario, Canada), 2001.

The phrase is "in" rather than "with" clips. Once I had what looked like the relevant word, sure enough, I could find it in the Russian-to-English section of a dictionary!

ВОБОИМАХ the illustration shows. There needs to be a space after the В or "in", and ideally a diacritical mark over a later letter. Military crates might omit the mark and use И instead of Й, expecting a native speaker to figure it out.

But, ideally, "in (stripper) clips" would be:
В ОБОЙМАХ
Transliterated for an English speaker to pronounce it:
V' oboymakh

Philippe Lafargue has written two fantastic references to the 7.69x39mm round as manufactured and packaged by Russia and by China. There's also a discussion on an SKS files forum.

Related pages on this site